Tactic of the Week

Ultimate frequently utilises a Zone defense.  This is where you are marking an area, rather than one particular player, and sticking with anyone who moves into your area until they leave again.  Fans of Basketball, AFL, and NFL will have seen this before. The most common zone we use at the moment is called a 'Puppy-Fence' zone.  Here is a brief description of the positions in this Zone.

Puppy:  This player chases after the disc.  They are always marking whoever has the disc, and obviously jumping around wagging their tail.

Fence:  The fence comprises of 3 people who stand three metres back from the thrower.  They are trying to a) stop throws going forward and b) mark cutters coming between them and the thrower. The fence moves as a unit, acting to contain the throws and add pressure to the thrower.

Wings:  The 2 wings mark and cut down options further down field.  Sticking to players on their wing, but making sure to cover cutters sneaking deep of them

Deep:  The deep is the last line of defense.  The deep marks the longest cutter, as well as tells the wings if there is anyone threatening their space. 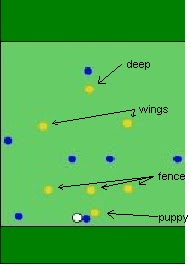 In this picture, if the disc is moved to the blue player immediately left of the thrower, the puppy will get inbetween her and previous thrower, while the fence moves across to the sideline to stop throws up field.  It will make more sense when we start using it.

Next week, I'll be detailing the offensive structure against a zone D.
Posted by Huddy at 11:55 PM No comments:

Email ThisBlogThis!Share to TwitterShare to FacebookShare to Pinterest
Labels: Tactic of the Week

The playing group was almost completely different, but we still got 6 vs 6 on the field on a beautiful afternoon.  The low wind and improving skill of all players led to a highly enjoyable game.  With the luxury of a sub, most of us got to play with everyone else at some point, and we got a few photos out of it..

In the end, team red won the game to 4 by 2 points.
Great to see everyone getting better!

Player of the week: Jackie
Posted by Huddy at 4:53 AM No comments:

With ominous clouds brewing over St Leonards, Ivan and his friends returned to have a throw with us, while James brought another couple of people to make 6 vs 6.  After rearranging our field to share with some soccer kids, we started a fun and eneergetic game, with everyone learning the basics of Stacking and Forcing quickily.  Both Catherine and Maddy started off a little nervy, but as they got more comfortable seemed to thoroughly enjoy themselves, while Lachie took to ultimate like a proverbial duck.

Ivan and friends left just before the rain came down, and as everyone knows, rainy ultimate is the best.  lachie epitomised this by taking a superb layout catch in the endzone, while Catherine showed a natural affinity for catching the disc if it was anywhere near her.  In the end, we played til dusk and a bit beyond, finishing with the 3 on 4 style with Maddy always on O.  The non-bib team (Huddy, Ido, and Catherine) come up trumps at the close.

Player of the Week: Lachie (anyone who takes a layout catch to score has to get it)
Posted by Huddy at 6:22 PM No comments:

Idea of the Week- Spirit

When someone else has said it better than you could, there's no point in rehashing it.  So for the Idea of the week, I have copied some excerpts from the Hamilton Ultimate website as follows:
The Spirit of the Game (SOTG) is what distinguishes Ultimate frisbee from all other sports. It allows us to play the game competitively and fairly, obviating the need for referees, penalties and poor flow. The concept of SOTG places the responsibility of sportsmanship directly on the player. Competitive play is encouraged but never at the cost of mutual respect, adherence to the rules and enjoyment of the game. Aggressive play, intentional fouling and other ‘win at all cost’ behavior are contrary to SOTG, they must be avoided by all players. If you are playing Ultimate only to win, you just don’t get it.

End of game talks and spirit-games are not a substitute for a game played in poor spirit. SOTG should pervade through the entirety of the game. You can demonstrate spirit through a positive attitude of camaraderie within your team and with the team you are playing with. Know the rules and stick to them, avoid dangerous play and eliminate arguments. Remember to celebrate the other team, without them you would be unable to play the game. By fostering a positive environment you will end the game more satisfied than frustrated and have made a new set of friends.
Posted by Huddy at 8:29 PM No comments:

Email ThisBlogThis!Share to TwitterShare to FacebookShare to Pinterest
Labels: Idea of the week

There was less wind than usual on a sunny Sunday afternoon, and although the Americans and a few others couldn't make it, we still managed to field 4 on 4.  Carl and Sofie were new, but had played a game before so there was little explaining to do.  Everyone was developing better understanding of game positioning and how to move, with Sofie and Michelle outstanding in their ability to find space.  Although Carl claimed a hang over, he was the most lively player out there, frequently throwing himself around. 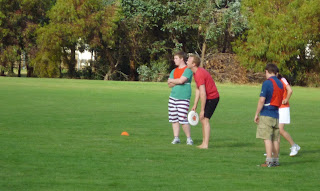 In the scoring game (first to five) at the end, the red team sprung out to a 3-0 lead, but black brought it back to 3-2 thanks to some good long cuts from Aidan, and stayed in touch to be 4-3 down.
Although there were a couple of turnovers in the next point, Red were able to hold on and move the disc smoothly for the winning point. 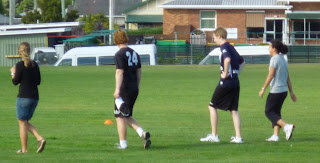 New players: Carl, Sofie
Player of the week: Michelle
Posted by Huddy at 5:18 PM No comments:

Tactic of the Week

A 'force' is so called because you are forcing the thrower to only throw to one side of the field.  By preventing throws to one side, you're limiting the options and allowing your teammates to focus their defensive marking on one side.  The diagram below (which I ripped off some unsuspecting ultimate site) shows how the defense should ideally set up.

The two directions to force are Home (the side where your stuff is) and Away (the side where your stuff isn't).  Usually, some local vernacular comes into play to describe the force side, we might use force Bowls (toward the bowls club) or force Uni (toward uni).  We're going to work on forcing this comign week, so if you hear me yelling a force, try and force the thrower to throw that way. If you get confused, don't worry, everyone does. It took me a million years to learn a force existed, then another half a million to work out what it meant.
Posted by Huddy at 2:56 AM No comments:

Email ThisBlogThis!Share to TwitterShare to FacebookShare to Pinterest
Labels: Tactic of the Week

On an overcast and lightly windy day, we welcomed two new players, Ido and Phoenix.  With the weather and field trips conspiring to limit our numbers, we started a game of 3 vs 4 (with Jackie always on offense, a fun way to play!) before Reggie and another of his numerous friends Daniel showed up for a vigorous game of 4 vs 4 with a sub.

There was a lot of smooth passing and good movement occurring, which is always difficult in the wind.  Phoenix frequently impressed with her long backhands, while Daniel's enthusiasm in his first outing of ultimate was good to see.

Newcomers: Ido, Phoenix, Daniel
Player of the week: Aidan
Posted by Huddy at 2:55 AM No comments:

To find out more: 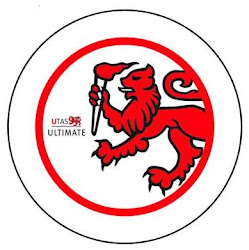 Huddy has UTas discs for sale for $15 each